On Saturday 29th January at Woodstock Masonic Hall, members and guests of the Aelfric Lodge were pleased to celebrate the 263rd anniversary of the birth of Robert Burns, the well-known Scottish poet.
The Haggis was piped in by Piper Scott Weston and was addressed by W/Bro Alan Mills, pictured above, who acted as Master of Ceremonies.
The assembled company then enjoyed a traditional supper consisting of cockeleekie soup, haggis with a wee dram, roast beef, tipsy laird, biscuits and cheese, coffee and shortbread biscuits.
W/Bro Roger Hazelden recited the Immortal Memory.
The Lassies were presented with a single red rose after which “The Red, Red, Rose” by Robbie Burns was sung by Mrs Louise Woodwards accompanied by W/Bro Peter Smith on the Piano.
The Worshipful Master W/Bro Neil Wisbey proposed a toast to the Lassies to which Mrs Sheelagh Wisbey replied with a toast to the Laddies.
Guest of honour was Mrs Maureen Peirce, wife of the late W/Bro Eddie Peirce, founder of this event. 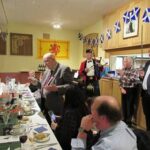