PROVINCIAL GRAND SENATUS OF THE CHILTERNS

The current Ancient and Masonic Order of the Scarlet Cord is based on an earlier Order. The Royal Order of Knights of the Scarlet Cord, developed in the British Isles in 1889, which was itself derived from 18th Century documents from the Amsterdam Masonic archives.
The rituals and ceremonies were rewritten and enriched by His Honour Judge Fredrick Adolphus Philbrick, KC, and were performed as appendant grades to the Order of the Secret Monitor. The rituals of the Order are taken from Old Testament times, commencing at the period of Joshua, the fall of Jericho and the story of Rahab. The main purpose was to raise considerable sums of money for the Secret Monitor Benevolent Fund, which still plays a significant role in Masonic welfare provision today. The Order ceased working in 1929.
A paper on the original Order written and delivered in 2001 by Peter Glyn Williams, the then Grand Supreme Ruler of the Secret Monitor, stimulated interest in the long-forgotten rituals. In 2006 a Secret Monitor Conclave was Consecrated with the sole purpose of reviving the old Order and conferring updated versions of the original six grades, some of which only remained in fragmented form. A huge appetite for the grades among Secret Monitors led to the Order being inaugurated as a separate Sovereign body in a magnificent ceremony in the Grand Temple at Freemasons' Hall on 21 July 2010.

The qualifications for a candidate to become a member of the Order are that they are Master Mason and Prince of the Order of the Secret Monitor.
If you would like to know more please contact the Provincial Recorder or one of the Recorders of the five Scarlet Cord Consistories within the Province of the Chilterns. 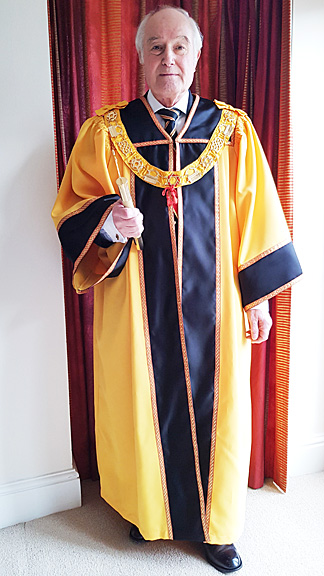