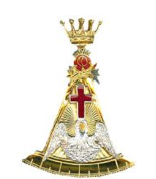 The Ancient and Accepted Rite derives from the Rite of Perfection, which developed in France mainly in the quarter-century before September 1762. Its constitution, and the rituals for its twenty-five degrees, were formalised by Francken in a manuscript bearing that date, though probably written somewhat later. It was followed by The Grand Constitutions of 1786, dated May 1786, which describe the Ancient and Accepted Rite, consisting of thirty-three degrees, largely as it exists today. This document was presented as the product of a Council meeting under the titular direction of Frederick the Great. The original has not been found, and the copies seem to date from nearer to 1800.

In May 1801, in Charleston, the first Supreme Council following the Grand Constitutions was opened (now known as The Southern Jurisdiction of the USA). It was followed by France (1804), Spain (1811) and the Northern Masonic Jurisdiction of the USA (1813). Ireland (1826) was the sixth, England and Wales (1845) -- receiving its Patent from the Northern Masonic Jurisdiction -- was the eleventh and Scotland (1846) the twelfth. There are now independent Supreme Councils in over 60 countries.

The qualification for joining is that the Candidate must have been a Master Mason for at least one year and be in good standing with the Craft. He must profess the Trinitarian Christian Faith and be willing to take an Obligation in the name of the Holy and Undivided Trinity.

The District encompasses the whole of the County of Oxfordshire and is headed by an Inspector General (currently Very Illustrious Brother Peter Jones 33°). This office is roughly equivalent to a Provincial Grand Master but the District membership is much lower (250 members or thereabouts). The Inspector General is supported by a District Recorder, who again, is roughly equivalent to the Provincial Grand Secretary. The current District Recorder is Illustrious Brother Graham Anker 32°.